Hello all! I know it's been ages since I posted in here, so I wanted to update it to let you know that I've got a new blog location for Winding River Fiber Arts yarns.

Please add http://windingriverfiberarts.blogspot.com to follow my updates, adventures, and yarn!

xxoo
Christina, Winding River Fiber Arts
Posted by Christina at 10:14 AM No comments: 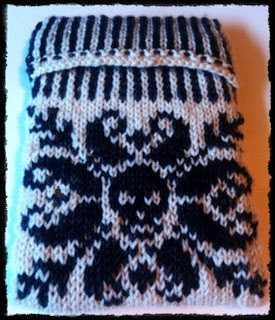 My Kindle needed an awesome sleeve, so after searching and not finding just the right thing... I wrote my own pattern.

Queue this pattern on Ravelry!

Knitting designer, Nakia Casey, had asked me to test knit her recent pattern, "Rowr Mitts" (Ravelry download here).  It's a colorwork design, using two colors of your choice, and a quite easy-to-knit technique called mosaic or slip-stitch. I hadn't tried this method before, so I was excited to see how it went, in comparison to fair isle. It's a very cool method, and if you haven't tried colorwork before, or don't like trying to figure out how to hold both yarns at the same time, then give this pattern a try. My daughter loves anything animal print, so she instantly took to her little leopard mitts!

I spent about one day of knitting for each mitt, and made the child sized pair for my daughter. I used my Twisted Sock yarn for these, but would also suggest using my Classic Sock yarn as it's 100% merino and fluffy fibers love to "hug" each other while doing colorwork. You will end up knitting one row of the chart with only one color at a time, and slipping the opposite colored stitches. Then you repeat that same row once more, then switch to your other color, knit those stitches, while slipping the opposite colored stitches and repeating the same row again, one time. Then move to the next row of the chart, and so on. This method makes it fast and really simple to manage.

The charts themselves are quite clear and easy to follow. The pattern itself is well-written so there's no guess-work. Overall, I really loved the pattern itself, and am loving the end result! This is the perfect kind of knit if you want some instant weekend gratification, or have a gift you'd like to make, pronto. They're pretty versatile as well, because the adult pair uses 3 repeats of the chart for the wrist until you get to the thumb gusset, but you can easily knit two or even one repeat depending on how long you want them to be on your arm/wrist. I used my kettle dyed yarn, and it looks great! You can also try out a gradient yarn as the background, or the contrasting color to change the ending effect.

I think one of the reasons these mitts knit up so quickly is because the chart and pattern changes enough to be interesting, and has a really great rhythm to it so that you don't want to put it down. It's more fun to just keep knitting it until it's done.
Posted by Christina at 2:28 PM No comments:

You never know what the Owls are going to deliver~ Harry Potter Sock Yarn Club!

Okay, so maybe I'm a little obsessed. But well, it's fun! The signups are ready at my Etsy store for the newest Harry Potter sock yarn club. It's a six month club, and there will be goodies included in each shipment, and shipping in the US is included in the price! 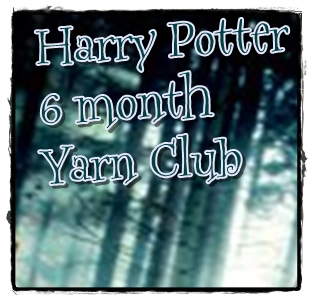 This time around, I have some ideas in mind, and I can't wait to put them onto yarn for the colorways. Good or bad, nice or naughty, person, place, or thing!

Colorways will be exclusive to the members of the sock club, and members can purchase additional skeins of their choice at any time. I'm not sure if I'm going to re-release the colorways after the club, but if I do, it will be at least six months after the club closes in 2011.

First shipment goes out December 15th, 2010, hopefully getting to you in time for the holidays. Oh, and this club could be anything from any of the books..
Posted by Christina at 8:27 AM No comments:

With the start of my Harry Potter 2010 Yarn Club underway, there is a new yarn that is a companion to the club. The dyeing process for this yarn is unique so the colors for this turned out just amazing! 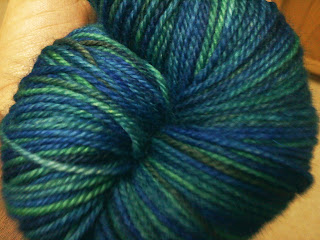 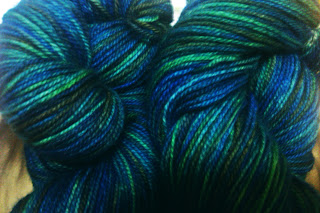 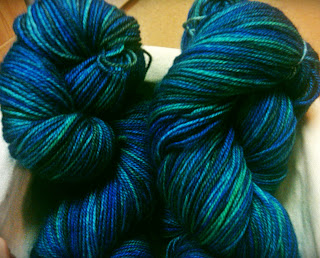 Do you remember Hogwarts Lake?... The Black Lake. Harry crossed it in a tiny boat with Hagrid as a first year seeing Hogwarts Castle for the first time. The Merpeople lived there, and they held his friends under the water, captive, for the Second Task in The Goblet of Fire. The Merpeople came out to sing a lament song for Dumbledores final rest into The White Tomb...
Beautiful, luxurious colors of deep blues, paler blues, sea greens, emerald and browns play onto the sparkling blue faced leiscester yarn base. It has a high aqua cast in natural and bright lights, and outside of that you can see the deeper blues that play into it. This effect is achieved from the over-dyeing and gives it unique color.BFL yarn is shimmery, quite strong, and soft; this blend has nylon added in to make it an even more durable softy. This one is also a superwash so you can machine wash it for ease if you choose.It's a unique colorway with an initial kettle dye, then colors were hand painted on, then another immersion into the kettle to overdye the yarn.Specs:BFL Sock (80/20 superwash light sportweight BFL, nylon)333 yds approx - 100g.Heavy fingering to light sport weight sockMachine wash gentle, dry flat
Posted by Christina at 9:18 AM No comments:

This past weekend was the Oregon Flock & Fiber festival. I headed out there with my daughter so we could have a little girl-time (important when you're outnumbered by males 5 to 2 in your household ;) ) and check out the fiber stuffs.

The sheep, goats, alpacas, and rabbits were a big hit with my daughter, as well as all things soft and fluffy - which is most everything there really - she loved the angora rabbit and decided that this really needs to be our next animal for our household.

I found some dye that I needed at an excellent price, as well as picking up a drop spindle and some roving so I can try my hand at something new: Spinning! Now I haven't had much time to play with it yet, but if I ever want to own one of those gorgeous spinning wheels, I better get the hang of the drop spindle!

Posted by Christina at 12:12 PM No comments:

Ohhhh I just love the Autumn season... I'm going to have to dye up some of these special Autumn Harvest yarn packs for myself too! I've had that Mythos pattern from Knitty's First Fall issue in mind... I think I might have just the right yarn in mind now too.. 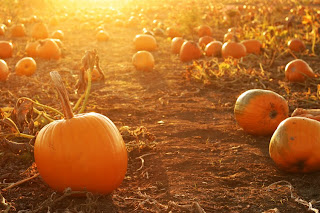 Order Autumn Harvest Yarn Pack
Right now in my Etsy shop I have Autumn Harvest Yarn packs for sale. Each pack is like a mini-club, meaning that it's two skeins of yarn, dyed in the same colorway and going out in one package. Each package comes with surprise Autumn goodies to enjoy during your seasonal knitting.

It'll be enough yarn for knitting a shawl, or a sweater like I'm thinking of above, gloves, mitts, a scarf, whatever project you've got in mind. It's available in my Twisted Sock yarn base, which is soft and plush, with a nice twist to it. The yardage for each double skein pack is listed below. And like always, anyone who orders yarn clubs or packs can order additional skeins of yarn if you want more of the same limited colorways. Just convo or email me to find out price per skein :)


Happy Autumn!
Posted by Christina at 6:00 PM No comments: